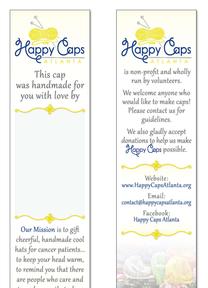 This list below includes volunteers who have been active in the past 12 months.

Each Happy Cap includes a gift tag from the volunteer

who made it  , with a personal handwritten message to the  recipient. 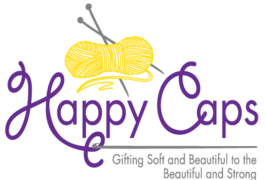 ​Happy Caps could not grow to serve so many without the help of volunteers who support overall operations. A special thank you to Sandy Mers, Pat Anderson, Benay Whittaker, Diane Taylor, Judy Hart, Pat Trice, & Pat Lanier for helping to deliver Happy Caps. To CarMax employee volunteers  who sort & tag Happy Caps. Thank you to Helen Pumillo, Paulette Smith, Sherry Engelken, Kathi Mansfield & Sandy Mers for weekly sorting, tagging and bagging for deliveries. We couldn't do this without you!